SACRAMENTO – Monday, April, 24, 2006, Assemblymember Pedro Nava honored Stanley and Edith Ostern in the Chambers of the California State Assembly in a tribute to Survivors of the Holocaust.

The Osterns were selected by Assemblymember Nava and the Jewish Federation of Greater Santa Barbara for their selfless and courageous sharing of their stories to further this cause that is vital to our future and our children’s future.  “It is a great privilege for me to honor the Osterns for their work in sharing and preserving their stories for future generations,” said Assemblymember Pedro Nava.  “We must never forget the horrors that can come to pass if we are not vigilant.  The way to do this is to be good stewards of history and by preserving every story possible.  It takes great courage to share these stories and I commend the Osterns for their bravery.”

In addition to the ceremony today, the California State Assembly produces a book of essays each year with the stories that have been collected across the state.  Nava submitted 40 essays to the book this year, more than doubling its size.  This contribution was made possible by the contributions of the Jewish Federation of Santa Barbara who submitted 38 stories of survivors who are currently participating in their Portraits of Survival Exhibit.  Two additional essays were submitted from Ventura County residents who dedicate much of their time to sharing their stories.

Over 30 Holocaust survivors were honored from throughout California.  An Assembly Resolution was presented declaring April 24-30, 2006, “California Holocaust Memorial Week.”  The Osterns, along with other participants in the Portraits of Survival exhibit, will be honored at a public reception in June with their family and friends at the Jewish Federation of Greater Santa Barbara. 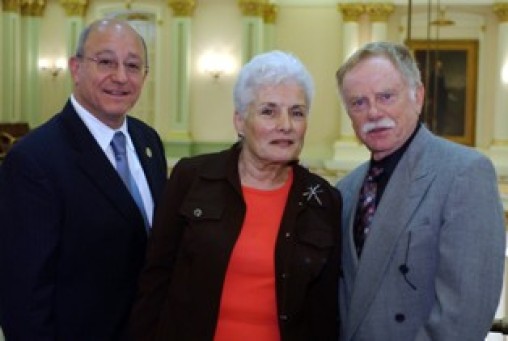