Of Life and Loss: Santa Barbara Museum of Art and Jewish Federation Partnership

Sunday, November 9, 2008
A Community Commemoration of Kristallnacht in conjunction with three exhibitions

The Museum and Jewish Federation partnered in a series of programs and activities revolving around three exhibitions on view through December 28 (page down for more exhibit information):

Of Life and Loss: The Polish Photographs of Roman Vishniac and Jeffrey Gusky at the Museum

The Holocaust Archive Revealed photographs by Richard Ehrlich, and

Portraits of Survival at the Bronfman Family Jewish Community Center.

November 9, 2008 was a historic experience in our community, as people -estimated at over 500 - from all walks of life gathered for the commemoration. The museum gallery was packed, and we heard speakers Mara Vishniac Kohn, Jeffrey Gusky, Museum Director Larry J. Feinberg, Curator Karen Sinsheimer and Portraits of Survival Director Dr. Elizabeth Wolfson.

Then several hundred people took to the street with candles, and the crowd stretched out many blocks, creating a stream of light down State Street. As we arrived at the Bronfman Family Jewish Community Center, the line to enter the building went through the parking lot to the sidewalk. The SB News Press reported, "The march - attracting people of all ages - spanned multiple blocks, and along the way, motorists stopped at traffic signals called out to the group and asked what was going on." There were volunteers of all ages and all backgrounds, from middle school age to adults, all helping with the crowds. Larry Feinberg, SBMA director, said it was the biggest opening at the Museum that's he knew of.

Benji Lujano (a high school student who visited Portraits with a group of identified "at risk" youth) spoke about how his life changed after hearing survivor Stan Ostern. Benji told the packed room that Portraits inspired him to go back and do things differently with his family.

Lisa Rosza (a 90 year old survivor) thanked us for helping her find a cousin who sheltered her mother after surviving Auschwitz. Lisa, who lost most of her family in the Holocaust, was discovered by this cousin recently through the Portraits website.

Leading up to this event, the SBMA and JFGSB have been working jointly on a series of educational programs aimed at reaching youth from diverse backgrounds, offering inspiration to combat prejudice and creating positive alternatives. 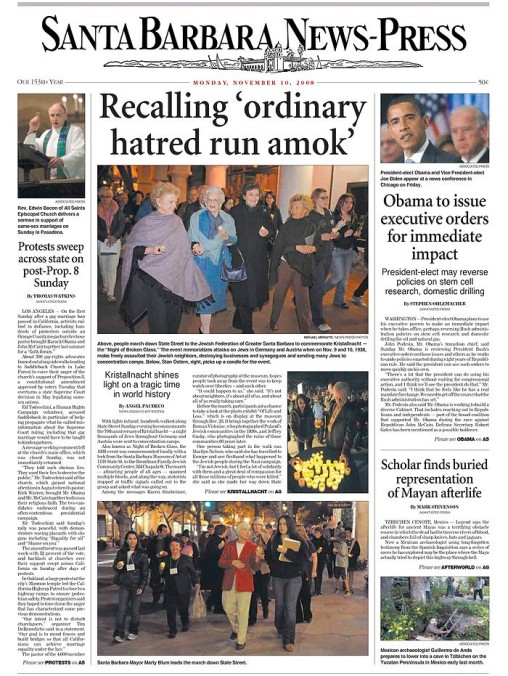 More about the two exhibits.

A series of photographs taken at the Holocaust Archives at the International Tracing Service (ITS) in Bad Arolsen, Germany, illustrating the staggering bureaucracy of the Nazi regime, with images at once artistic and chilling.

Through Ehrlich's lens, we see the obsessive mentality of the Nazi bureaucracy—countless aisles of catalog drawers, towering stacks of paperwork, row upon row of file folders. At a time of resurging Holocaust denial, these folders, storage boxes and ledgers—the normally mundane paraphernalia of record keeping—provide painful and irrefutable evidence of history's most unimaginable crime.

Among the many individual documents depicted in the portfolio are the original Schindler's list, and a transport order to Bergen Belsen including Anne Frank's name. Through Ehrlich's photographs, we can read entries in the Buchenwald prisoner logs and death book, read of a precise every-two-minute shooting Himmler ordered in honor of Hitler's birthday, and view medical records that count the lice removed from prisoners.

Of Life and Loss: The Polish Photographs of Roman Vishniac and Jeffrey Gusky
October 25 - December 28, 2008

This exhibition, organized by the Santa Barbara Museum of Art, features 45 photographs by Roman Vishniac, made in Poland’s Jewish communities in the mid-1930s, and an equal number of images by Jeffery Gusky, taken six decades later in many of the same areas.

Roman Vishniac, a Russian-born photographer, captured the colorful lives and traditions of Central and Eastern European Jews before the conflagration of the 1930s and 40s. Prompted by a commission of the American Joint Distribution Committee, Vishniac took over 16,000 photographs (2,000 of which survived the war) over a three-year period. His poignant works feature vibrant communities filled with life: men, women and children in their homes and schools, at their trades and in their streets, markets, and temples.

Six decades later, Jeffrey Gusky, a fine art photographer and rural emergency physician from Texas, traveled to Poland to photograph the ruins of these long-destroyed communities.  Gusky's photographs were motivated by his personal feelings of horror, experienced five years before 9/11 while traveling in Poland, that mass destruction could happen again in modern times.

Examining each photographer separately, Vishniac and Gusky have very distinctive photographic styles. Due to the nature of his project and the ever-escalating semblance of anti-semitism, Vishniac’s photographs are less polished and more emotionally raw in an attempt to tell the stories of people’s individual lives.  By contrast, Gusky finds inspiration in the physical places which made up the world of now entirely absent communities of Jews.

While each photographer had an individual style and statement to make, it is both the relationship with and stark difference between the two that provides the greatest emotional poignancy.  The exhibition pairs many Vishniac and Gusky photographs, illuminating the individual lives lost, culture destroyed, and environments degraded by decades of neglect in Poland, as Gusky photographed the desecrated cemeteries, crumbling synagogues, and empty streets that served as the backdrop for Vishniac’s scenes of mid-century Jewish life.

There are also several points of convergence in the biographies of Vishniac and Gusky. Like Vishniac, Gusky is of Russian Jewish descent, and both men were compelled to their photographic projects in part by personal reasons springing from their Jewish heritage.  The photographers also have professional ties to biological science which embody their work through illustration of the fragility of human life.