Longtime Santa Barbara resident Eric Boehm is perhaps best known in the community for his founding of the publishing company ABC-Clio, or for his work with various philanthropic and service organizations.

But with the publication of a new non-fiction historical book, Mr. Boehm's critical role in helping dissolve the Supreme Command of the Luftwaffe in Germany during the waning days of World War II will be internationally known.

Mr. Boehm's first-person account of his work as an intelligence officer and interrogator at Gen. Dwight D. Eisenhower's European headquarters is detailed in "The Enemy I Knew: German Jews in the Allied Military in World War II," by author Steven Karras. The book, published by Zenith Press, details the stories of 27 German and Austrian Jews serving in the allied military during the war.

Mr. Boehm is generally credited with conducting successful interrogations of top leaders of Adolph Hitler's Luftwaffe, or the German military air forces, and it is those stories that make up the bulk of his portion of the book.

At one point, Mr. Boehm was the interpreting officer at the arrest of Wilhelm Keitel, head of the High Command of the Armed Force and one of Germany's top military leaders during the war. The Nazi was eventually tried at the Nuremberg trials, and executed for his war crimes.

Mr. Boehm's journey to that level of U.S. military command had its origins in his upbringing in a middle-class German Jewish family. As a young boy, Mr. Boehm watched as Hitler came to power and many of his classmates joined the Nazi Youth. He and his family quickly saw the problems faced by German Jews -- he and his brother could not swim in village pools or participate in a Germanic solstice celebration simply because they were Jewish. "Some people in my class were ardent Nazi and anti-Semitic," he recalled. "I remember very vividly; it bothered the hell out of me."

Concerned about what that might mean for the future, Mr. Boehm's parents shipped the 16-year-old boy in 1934 to the U.S. to live with an aunt and uncle, even though their possible deportation to a concentration camp was not imminent. "At that time, the Nazis were not doing mass slaughter," Mr. Boehm noted. "They'd dig a trench and shoot them and shovel dirt over the bodies. It's hard to believe human beings can be what they are." Mr. Boehm's brother, Werner, went to the U.S. three years later, and his parents did not escape until 1941.

Mr. Boehm was able to complete an undergraduate degree in history and chemistry at the College of Wooster in Ohio and later received a master's degree in international relations. Desiring to serve his adopted country, Mr. Boehm enlisted in the U.S. Army Air Corps and was ultimately assigned to work as an interrogation officer. He held the rank of lieutenant.

"I felt it was my patriotic duty to join," Mr. Boehm recalled of the time. "It was all slightly hysterical (the war fervor). Military police were patrolling Massachusetts, aware a U-boat could land on shore and sabotage us. Really, in a sense deep down in my psyche, I had to do something for my country."

Though he loved his native land, Mr. Boehm said the opportunities he received in American made him a "super patriot." "My identity was USA," he said, reclining on a couch in his Micheltorena Street home. "That was my future. I had never any desire to go back." He ultimately became a naturalized citizen in 1941.

Mr. Boehm believes he came to the attention of his commanders based on his previous scholarly work translating German documents about transitioning from a wartime to peacetime economy after World War I. His heritage played a role as well. "The reason I was selected, I am Jewish and I looked Jewish," Mr. Boehm said, smiling. "They thought, 'We'll fix them.' "

His first interrogation of a prisoner of war occurred in England. A hard-sell approach by another serviceman didn't work with the prisoner, so Mr. Boehm took walks around the secured interrogation center grounds with the German officer.

"I recognized the only way to get someone to spill the beans was to tell them it was in their best interest," he explained. "My first interrogation, the person was very unwilling to respond to the other interrogator. Out of it came a detailed report of Luftwaffe operations, the most detailed report."

He said in a sense, he and the Nazi became friends, united in the cause of ending the war. "The longer the war lasted, the worse it would be," he would tell the prisoner. "Germany was bombarded day after day. He became very cooperative. We had a common cause, to end this damn war. We were not an American officer and a German officer, but two people who wanted the war to end as soon as possible."

When word leaked of his success, he received a standing ovation from fellow officers, he said.

In the "Enemy I Knew," Mr. Boehm details his work interrogating Luftwaffe Gen. Eckhard Christian, who served in Hitler's headquarters, and of his work with Otto Koller, chief of staff of the Luftwaffe, who was "incredibly uncooperative because he was not being interrogated by a more senior officer."

Because Mr. Boehm was based in a "detailed" interrogation center, he could sometimes have many days to work with a prisoner, rather than a few short hours. "I was very thorough," he recalled. "This is where people were either very willing to talk, or very knowledgeable, or both. We had the opportunity to do good work."

He loved the challenge, he said. "I could do good," Mr. Boehm recalled. "My adopted country was my identity. This was my cause I was fighting for. It was true fulfillment."

His commanders determined that Mr. Boehm's German heritage was incredibly useful. His knowledge of the language, the people and the geography was used all the time. Knowing what was happening to German Jews in occupied territory, Mr. Boehm said he had to be particularly careful not to be vindictive while working with Nazis.

"Fate put us in that situation; it was not matter of choice," he said. "We all had our assignments by virtue of our fate, our life."

During his time in the waning days of the war, Mr. Boehm was also involved in the interrogation of a German Messerschmitt 163 pilot, who had surrendered. He and a senior officer, a major, interviewed the pilot, who he says was the first jet pilot captured in the war. These many years later, it still slightly irks Mr. Boehm that the major received a medal for the interrogation and he did not. "I was put out," he recalled. "I delivered in a big way. He (the major) didn't look out for me."

In September 1945, Mr. Boehm found himself driving through Berlin. He saw corpses rotting in the canals and the city in ruins. He was on a path to the Thielschufer synagogue, to observe the High Holy Day of Rosh Hashanah in the Jewish year 5906.

"I wanted once more to attend a Jewish service as I had known it in Germany as a boy -- and to take part in the first New Year in 12 years to be celebrated openly and freely by Jews in Germany," he wrote later. "As I saw the congregation praying I felt there was a poetic justice in these of Hitler's and Himmler's intended victims being alive while their murderers were dead. Yet the survivors were few and the dead were many."

After leaving the military, Mr. Boehm was working in the headquarters of the U.S. military government in Berlin, part of a three-person press scrutiny board. They reviewed all the German newspapers in the region to glean information. While there, he met his wife, Inge Pauli. The couple had four children: two girls died in infancy and two sons, Ronald and Steven, are still living.

Mrs. Boehm died a decade ago and about five years ago Mr. Boehm founded the Boehm Group -- producer of biographies for individuals and families -- as a tribute to his late wife.

In the early 1950s, Mr. Boehm completed his doctoral studies in international relations at Yale, and published his own book, "We Survived: Fourteen Histories of the Hidden and Hunted in Nazi Germany."

"As these chapters show the weaknesses and the crimes of man, so they also testify to his strength and heroism," he writes in the book. "Let us draw our hope from that."

In retrospect more than a half-century later, Mr. Boehm says being personally involved in the "capitulation of Nazi Germany was the high point of my military career."

Mr. Boehm said his lifelong interest in "preserving knowledge" led him to a career in historical bibliography. He created ABC-Clio, an internationally known publishing company that focuses on bibliographic databases and reference books. He and his wife moved to Santa Barbara in 1960, and the firm grew locally and internationally.

Mr. Boehm said he felt it was important to participate in "The Enemy I Knew," largely because of his career. 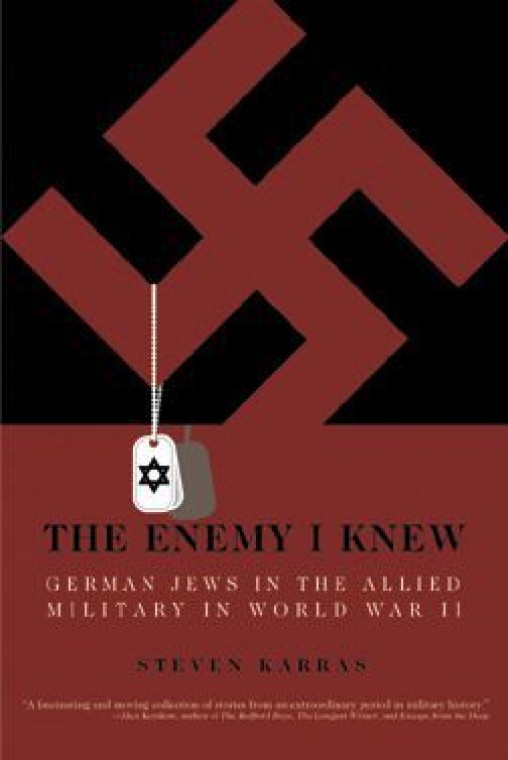 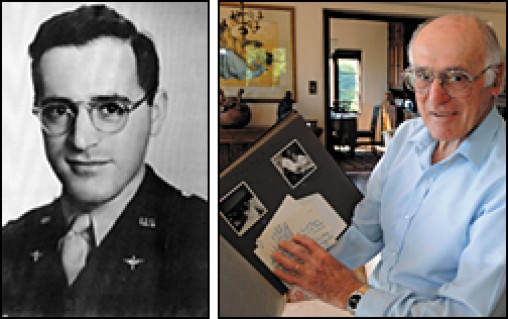 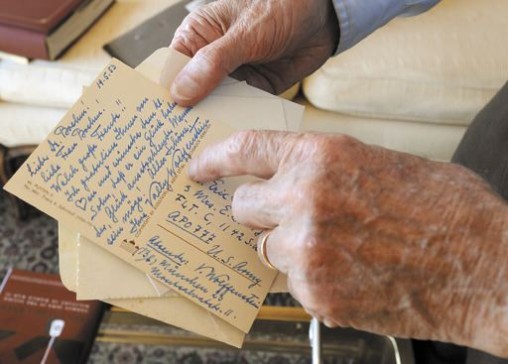 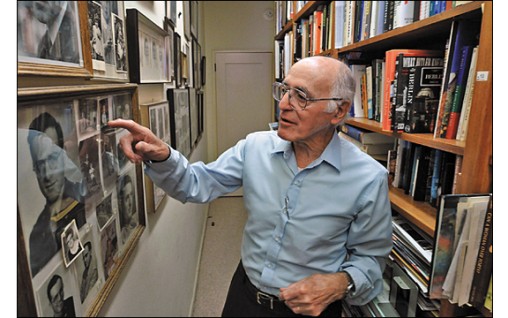