Our mother, Clara, was born October 2, 1919 in Komarno, Czechoslovakia. The family Raab, who were patriotic Hungarians, had lived in this town for generations, which prior to the First World War was named Komarom and belonged to the Austro-Hungarian Empire. The family ran a textile business in the town centre.

On Mother’s Day, 1937, Clara, 16-years-old, met 21 year old Leslie Reitman; they courted and planned to marry in the fall of 1938, but then fate intervened. Following the German annexation of Austria in March of that year, Leslie was called to serve in the Czech Army. Clara and Leslie were separated. On March 14, 1939, some months after the Munich Agreement and the German takeover of the Sudetenland, Komarno became part of an independent Slovakia - essentially a German satellite. This was the first time Clara ever felt persecuted for being Jewish; anti-Jewish violence erupted that night. Clara’s father was attacked with a club in front of their house.

The situation in Komarno became even worse when the German Army occupied Hungary in March 1944. Clara’s brothers Alex and Ernest were summoned to work camps. Her sister Edith had, fortunately, already left for Palestine. Hearing that whoever worked in the fields would be saved from deportation, Clara, her parents, and her sisters Lily and Olga (with Olga’s infant son, Tommy) rented land from a farmer. The farmer waited just until the field was ready for harvest before reporting them to the authorities. The family was taken to a ghetto, and from there, deported to Auschwitz in June 1944.

After the selection at Auschwitz, Clara and Lily were sent to Taha, a work camp nearby. Their single goal was to stay alive for each other. Clara recalled during an interview taped in the 1970s:  “With your shaved head, and no shoes, you had to carry big stones up the hill. And the Germans were standing over you, the sun, I still feel it on my head, no shade in the middle of the hot summer, and no drink and no stopping. It was terrible. I don’t know how we were able to do that.” Clara and Lily were then sent back to Auschwitz and went through selection a second time. After a narrow escape from death in the gas chambers, Clara and Lily were sent to a munitions factory near Leipzig. Of that time, she said,  “We worked underground and we worked very hard, but compared to the other life (back in Auschwitz), this was heaven. We had clothes on. And we got some warm food twice a day; the minimum. We were still very hungry and very tired.”

Suddenly the whole area was evacuated. Clara and Lily were marched out by the German SS with just the clothes on their backs. She recalled, “It was winter and snowing, no shelter over our heads. Sometimes we were marched 50 kilometers without stopping. We slept on the snow under the trees. Many were shot who couldn’t go on, or died along the way. We’d been walking like this for three or four weeks. I said that’s it. I can’t walk. I fell and I was waiting for when the SS man would shoot me. Lily just fell beside me because she didn’t want to leave me like this. And I remember when the German went by and stood like that (and looked at us). That’s how my life (hung by a thread). He just gestured with his hand. He was too tired to shoot me, I guess.”

Clara and Lily survived and returned to Komarno on May 27, 1945, to find their brothers, Alex and Ernie, and Clara’s fiancée, Leslie, had survived.

Clara and Leslie were married in Zlate Morace, Czechoslovakia, after eight years of waiting. 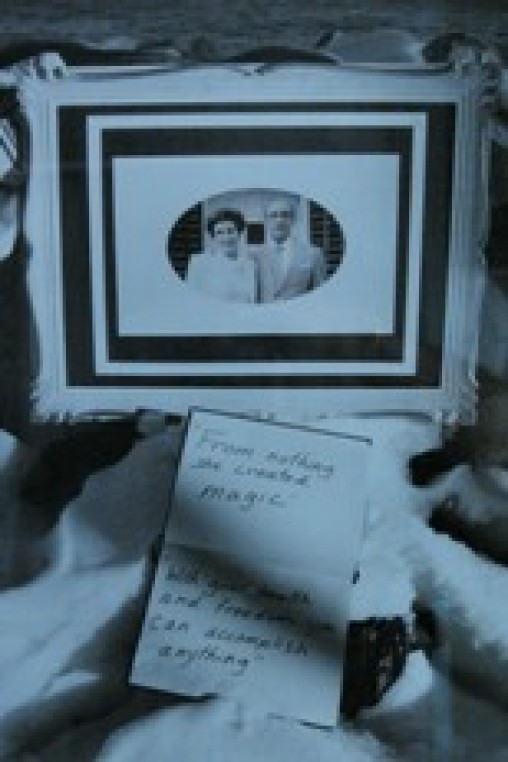