JFGSB Outraged by the Terrorist Attack in Jerusalem on Israeli Soldiers

The Jewish Federation of Greater Santa Barbara is horrified and outraged by the brutal terror attack near the Armon Hanatziv Promenade in Jerusalem on January 8, 2017. We hope and pray for a full and speedy recovery for the injured, and pray for the families of those senselessly murdered. May their memories be for a blessing.
A terrorist drove a truck into a group of young Israeli soldiers killing four and injuring at least 16 more. There is never any justification for such attacks. Israelis have a fundamental right to safety and security, and peace will only be achieved with a commitment to stop the terrorist violence that Israelis have endured for years.
We join Jewish Federations across the country in condemning this attack in the strongest possible way and call on the entire international community to share in this condemnation. This profoundly disturbing incident is reminiscent of the recent truck attacks in Nice and Berlin, as well as previous vehicular terrorist attacks in Israel, and reiterates the global threat terrorism poses to the entire free world.
Terrorism in any form is morally reprehensible, and we note that once again, Hamas, although not claiming responsibility for this heinous attack, immediately came forward with emphatic praise for the perpetrator. We call on the Palestinian Authority leadership to speak out against this latest attack, and to do all it can to repudiate terrorism and those who carry it out. 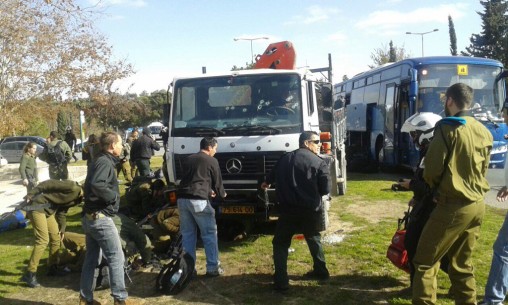