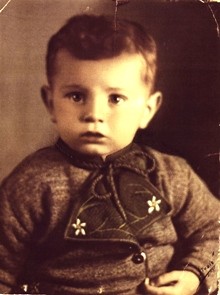 On recent a Thursday morning here at the Bronfman Family Jewish Community Center, 50 students, teachers, and parents from San Marcos High School were treated to a unique opportunity to witness history first-hand. Guests of our Portraits of Survival – Upstanders: Courage in the Face of Evil Holocaust Education Program, this group heard three incredible stories of survival from Dr. Stanley Ostern, who survived as a hidden child in a sealed bunker for two years; his wife, Edie Ostern, who escaped with her family as a young refugee from Vienna;   and Josie Martin, whose parents hid her in a convent during the war to keep her safe. The teacher of this group of 10th graders, Melanie Jacobson, has been bringing groups of her students twice every year since the opening of the exhibit and program in 2003. Ms. Jacobson and her students have also participated with us in various commemorations, including a moving Kristallnacht program last year.

Now, more than ever, Holocaust education is critical. In an atmosphere of rising hatred and incidents of anti-Semitism around the country and throughout the world, we are reminded that history could repeat itself – if we dare to let it. In an alarming study just published in the Washington Post, the Jewish Material Claims Against Germany commissioned a survey in 2018 to determine the level of Holocaust knowledge in the United States. The study found that 2/3 of American millennials surveyed cannot identify the Auschwitz concentration camp, and that 22% are unaware of or not sure if they have heard of the Holocaust. This last figure is twice the percentage of adults in this country as a whole who have expressed the same. In addition, more than half of those surveyed believe the Holocaust could happen again. However, despite a lack of historical knowledge, the survey found a desire for Holocaust education – in fact, 93% said all students should be required to learn about this subject in school.

Here at the Jewish Federation of Greater Santa Barbara, we are committed to this mission and making sure that the stories and lessons of the Holocaust do not disappear with those who were there, but instead remain as a legacy for all time.