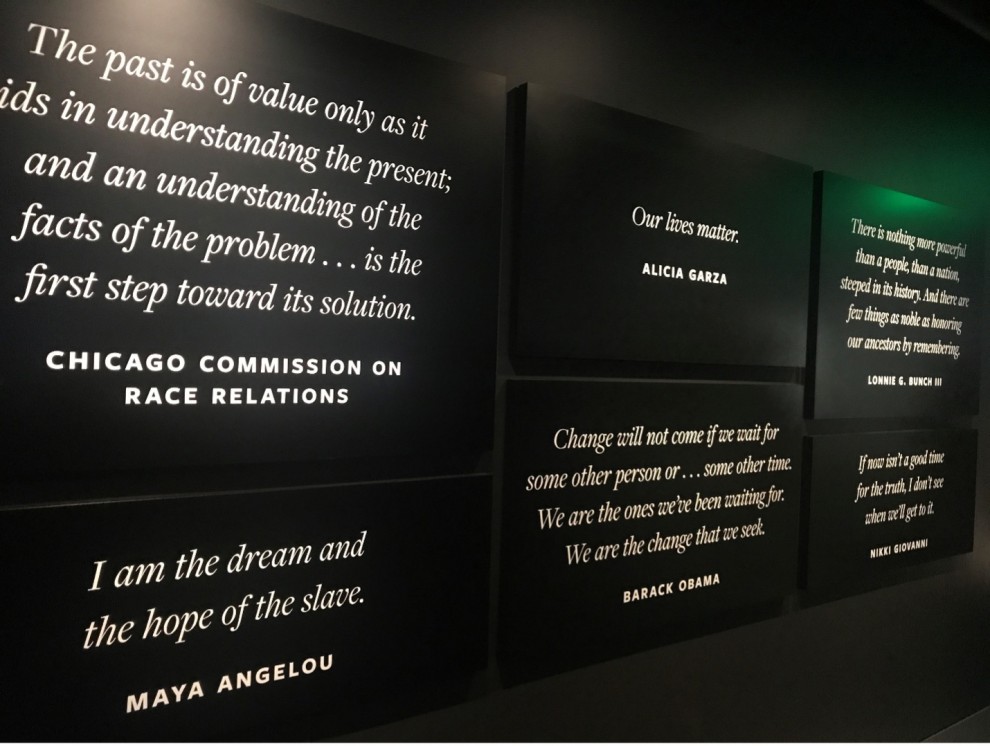 As Sabbath approaches this week, I find myself reflecting on Black History Month and a trip to Washington, DC two years ago this very week. A family meet-up in Washington is not unusual for us: I have one daughter there and another in New York – so my husband and I trade off on the destination. But on this visit, during Black History Month – chosen in February because of the birthdays of both Abraham Lincoln and Frederick Douglass – we had a life-changing visit to the National Museum of African American History.  Opened to the public just the year before our visit in 2016, the museum is the newest of the Smithsonian Institutions, the 19th museum on the National Mall – and it took decades to come to be. And one does have to ask the question: Why did it take so long to create this museum to promote and highlight the contributions of African Americans to this country? Perhaps because facing the harsh realities of this country’s treatment of African Americans is too difficult to come to terms with. But the museum itself is extraordinary. An elevator takes you down to the bowels of the building to start with the early periods of slavery and those very difficult chapters, and as you make your way up the building, you continue to feel the suffering through the Jim Crow era, the Civil Rights Movement, and the stories of continued systemic racism. But as you reach the top of the building, the museum begins to tell a story of joy. By the end, you have been on a journey and learned a great deal – quite an experience.

In deep discussions with my adult daughters and in thinking about my own otherwise mostly great education, there is a truth which must be told: there are serious gaps in what we teach our children about the Black experience in this country. I do not mean to be simplistic and suggest that the African American experience is monolithic, nor am I at all an authority on the topic. But, as my daughter Talya told me recently, in school she learned only half-truths about Black history: “First there was slavery and that was bad, and then there was Jim Crow, and that was bad, but then came the Civil Rights movement and Martin Luther King and that was good - then racism was over.” It is no wonder many in this country have difficulty understanding the full story of this nation’s history and all of its peoples, as we saw in the spectrum of opinions around this summer’s events.

As Jews, we are a people who study and appreciate history. But for history to have meaning and value, it must contain two things: the full truth and impactful stories. It is clear that the full truth of Black history is not part of the curriculum in our schools – and I think we are doing the students of our country a disservice because of this. There are so many important stories which, if taught, could broaden the minds of young people and help show them the deeply nuanced nature of Black history and the crucial contribution of the Black community to our country. Perhaps many of you saw the 2017 film “Hidden Figures,” about the groundbreaking all-female Black NASA team of mathematicians, who served a vital role in the early years of the U.S. space program. Without that film, I would never have learned the story of Dorothy Vaughn, Katherine Johnson or Mary Jackson – and I am so much richer for it! Last week, on PBS’ Nova, I watched a fascinating story of a brilliant Black chemist, Dr. Percy Julian, who was denied his PhD at Harvard due to racist policies in the 1920’s and after ten years of groundbreaking work in the field of plant chemistry at Howard University and abroad at the University of Vienna in Austria, he was awarded his degree and the acclaim he deserved for his work. Stories like these must be told, not just because of the outstanding heroes who are the subjects and contributors to our society, but because of the obstacles they had to overcome. Yes, there is shame for the racism and hurdles which had to be endured, but these are part of the whole American story. As Maya Angelou said quoted above, Black history is America’s history.

Finally, as a Jewish community, it is incumbent upon us to learn to include and embrace all Jewish voices – and that includes Black Jews and Jews of Color. For many of us, this is a learning curve, but one we should commit to. Growing up as an Ashkenazi Jew, I thought all Jews were like me - or were Sephardic or Middle Eastern Jews. But at Jewish summer camp, I started meeting Jews of Asian descent and African American Jews. Unfortunately, I was not given the context to understand how they fit in with the community. My friends and I often assumed they were adopted into Jewish families or had converted to Judaism. While that was sometimes the case, sometimes it was not. I was not taught, but had to teach myself, that my experience as a White Jew is not the defining Jewish experience. I am still learning, but I now understand more the true diversity of the Jewish community. Moreover, Black Jews face bigotry and hate in an intersectional way. Jews of Color often feel “stuck in the middle” – and finding an identity is very complex. Our synagogues and our Jewish organizations must embrace our communal diversity, facilitate meaningful dialogue, do all we can to help all Jews feel comfortable and included in our midst. And this starts with education – the key to understanding.

Wishing you all a peaceful Sabbath – one full of hope and many blessings,

Photo caption: This powerful wall as one enters the National Museum of African American History and Culture in Washington, DC contains the wisdom of diverse Black voices past and present, urging us to heed the lessons of this rich and complex history.