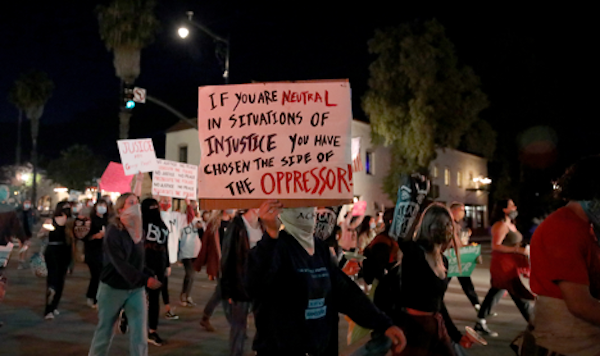 “For many of us the march from Selma to Montgomery was about protest and prayer. Legs are not lips and walking is not kneeling. And yet our legs uttered songs. Even without words, our march was worship. I felt my legs were praying.” – Rabbi Abraham Joshua Heschel, theologian and Civil Rights activist (1907-1972) after marching with Dr. Martin Luther King in the famous 1965 Alabama protests.

Amidst the chaos and confusion of our world, Shabbat approaches bringing the possibility of respite and peace. While we are appropriately wary, life is beginning to show some return to “normalcy,” which brings a feeling of hope. And while things may not look quite the same, we have seen that we can adapt to what may be a new normal. All of this, while our society continues to fight for justice and equality–and while the hurt and rage is not gone–much of it is now transitioning to looking for new solutions to old, deeply entrenched problems which must be solved, for the good of us all.

We have been here before, but something feels different this time. It reminds me of that old Buffalo Springfield song from the 60’s: “There’s something happening here…what it is ain’t exactly clear…It’s time we STOP, hey, what’s that sound? Everybody look what’s going down!”  But when we look at the crowds this time, it isn’t just young people of color out there – it is a rainbow of colors and demographics, which speaks to the pain of the country. And kernels of hope are already apparent in some systemic changes being suggested around the country and on Capitol Hill. These are positive – and we must not take our focus off of these possibilities.

But what about closer to home and on an interpersonal level? I received a number of responses to the Sabbath message I sent last week about standing up for justice. Many of you asked for direction in how to start the all-important dialogue about racism. Of course, the answer varies for each individual. And perhaps the most important thing to remember is that ending racism is a process – it cannot shift immediately. Listen and read everything you can from the perspective of Black, Indigenous, and People of Color (BIPOC) to understand their pain, needs and experiences to determine how we might become better allies. Point the finger inward, not outward – start making it uncomfortable. Real change starts from within each of us.

Here I offer just one example to consider…a personal story of someone like you and me (Note this is used by permission and a very abbreviated version of a longer story):

“I am a 45-year-old white woman living in the South, and today was the first time I spoke frankly about racism with a black man.

When Ernest, my appliance repairman, came to the front door, I welcomed him in. When he realized I wanted to know about his experience with racism, he began answering my questions. What’s it like for you on a day-to-day basis as a black man? Do cops ever give you any trouble? The answers were illuminating.

Ernest, a middle-aged, friendly, successful business owner, gets pulled over in Myrtle Beach at least 6 times a year. He doesn’t get pulled over for traffic violations, but on the suspicion of him being a suspect in one crime or another. Mind you, he is in uniform, driving in a work van clearly marked with his business on the side. They ask him about the boxes in his car–parts and pieces of appliances. They ask to see his invoices and ask him why there is money and checks in his invoice clipboard. They ask if he’s selling drugs. These cops get angry if he asks for a badge number or pushes back in any way. Every time he is the one who has to explain himself, although they have no real cause to question him.

Ernest used to help folks out after dark with emergencies. Not anymore. He does not work past dinnertime, not because he doesn’t need the business, but because it isn’t safe for him to be out after dark. He says, ‘There’s nothing out there in the world for me past dark.’ Let me say that again. Ernest, a middle-aged black man in uniform cannot work past dark in Myrtle Beach in 2020 because it’s not safe for him. He did not say this with any kind of agenda. It was a quiet, matter of fact truth.

A truth that needs to be heard. When I asked Ernest what ethnic terms he gets most offended by, he said that the most offensive term people use is ‘boy’. Ernest has a bachelor’s degree in Electronics and an associate’s degree in HVAC. He is not a ‘boy’, and the term ‘boy’ in the South implies inferiority in station and status.

Ernest says most white people are a little scared of him, and he’s often put in a position where he has to prove himself, as though he’s not qualified to repair appliances.

Ernest doesn’t have hope that racism will change. His dad taught him ‘It’s a white man’s world,’ and he’s done his best to live within it.

When I asked him what I could do, he said: ‘Everyone needs to pray and realize we’re all just one country and one people.’

I am a 45-year-old white woman living in the South. I can begin healing our country by talking frankly with Black Americans in my world–by LISTENING to their lived experience and speaking up. I can help by actively promoting black owned businesses. That’s what I can do today. Let’s start by listening and lifting up. It’s that simple. #listenandlift

(I asked Ernest if I could take his picture and post our conversation on Facebook. He thought it was a great idea.) As he left my house an hour later, he looked me in the eye and said, ‘If you ever march, or have a meeting on this topic, or want to change things in Myrtle Beach, I'll stand with you.’ What a great idea. Let's begin standing together.”

A dialogue like this is certainly not the whole answer, but perhaps it can start here, with conversations like this.

Some of you told me you wish you had been at the large protest rallies. This video is from a moving moment at one of the major Washington, DC rallies in which the huge crowd suddenly joined together in singing the fitting song Lean on Me by Bill Withers, who passed away in April. My daughter Talya was at this rally and said that the feeling of unity among those gathered was one she will never forget.

Wishing you time to reflect and a peaceful Shabbat Shalom,