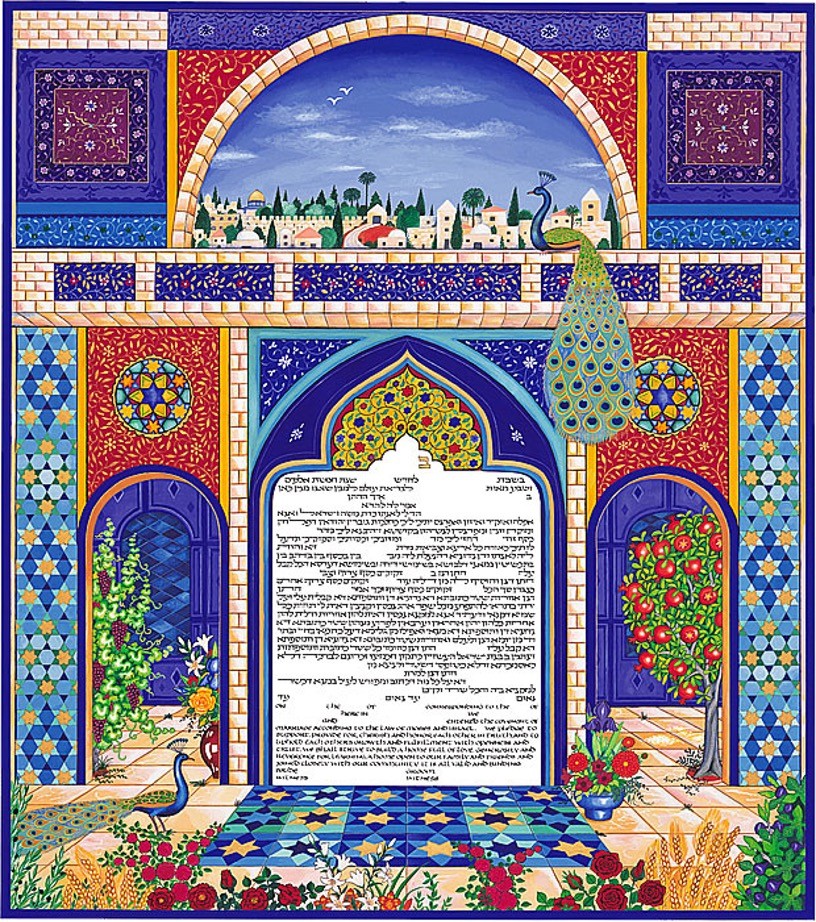 “May sounds of joy and gladness always be heard in the cities of Judah and in the streets of Jerusalem, voices of happiness, voices of bride and groom, the jubilant singing of those united in marriage under the Huppah.”

Under the sliver of the new moon of Tammuz, the first of the three Jewish months of summer, Sabbath approaches with new opportunities and hope for the season ahead. And I find myself thinking about the beauty of Jewish weddings – the ultimate in new hope for the future. Not only is this the traditional season for weddings in general, but I seem to be surrounded by the joy of both current weddings and memories of weddings past. Next week, my niece, who is very close to me, will be married – and it is quite the family affair, with both of my daughters in town from the East Coast for the event – and a host of family coming from Israel. Ruby Vargeson, our wonderful JCC Program Manager, just celebrated the wedding of her son, Adam to the beautiful Cassie last weekend – a hearty Mazal Tov to Adam, Cassie, Ruby, and their families! And my husband, Carl and I, just celebrated our 32nd wedding anniversary last week, which does not quite seem possible. Judaism is so rich when it comes to ritual, but in my mind, our tradition outdoes itself when it comes to the beauty and meaningfulness behind the many rituals associated with the Jewish wedding.

What are the rituals which help the couple – and indeed the family – spiritually prepare for the blessed wedding to come? The traditions associated with the Jewish wedding are centuries old and mostly from the Rabbinic era, with some variation based upon ethnic practices of Ashkenazic, Sephardic or Mizrahi Jews. I will primarily be discussing the traditional customs of Ashkenazic Jews. The Jewish wedding is hardly a one-day affair, with a variety of traditions held prior to the day – and some even afterwards, as well. In some Ashkenazic communities, the old custom of the Tenaim is still held, announcing the engagement of the couple and the “conditions” of the arrangement, followed by the smashing of a plate. This custom dating back to the 12th century, is the official Jewish “kick-off” of the wedding, with the broken dish a symbol of the engagement which must not be shattered. (Some families perform the Tenaim on the wedding day before the actual ceremony.) Closer to the wedding, many Jewish couples have an Aufruf, when they are called to the Torah on Shabbat, after which they are showered with candy, to symbolize the sweetness of life to come. Some Jewish brides choose to go to the Mikvah – ritual bath before the wedding, and some grooms do so, as well – a physical enactment of the passage from being unmarried to married, entering a holy covenant. Finally, some brides and grooms choose to embrace the ritual of fasting on the day leading up to their wedding, an act of spiritual cleansing in preparation for the sacred day to come.

On the wedding day itself, the simcha – joyous event – is marked by a host of beautiful rituals. The signing of the Ketubah before the ceremony requires two witnesses to be religiously valid, traditionally “virtuous men,” not related to the bride or groom. The Ketubah is a legal document, written in Aramaic, given to the bride by the groom as a guarantee that he will honor and care for her. Some couples choose a public Badeken, Veiling of the Bride, also prior to the ceremony. The groom is brought into a special room where the bride is sitting on a “throne” or decorated chair, attended by her family and friends – and the groom gently places the veil over her face, acknowledging her as his beloved and referring to the Biblical Rebecca covering her face with her veil upon seeing Isaac before their betrothal (Genesis 24:65). The rabbi blesses the bride and it is also customary at this time for her father to offer a personal blessing to his daughter. I remember this as a very special moment for me 32 years ago, since my father was also the rabbi who married us, since my father was also the rabbi who married us, the Badeken made doubly meaningful, his blessing so very sweet and personal, as he fulfilled both roles of rabbi and father of the bride.

The ceremony itself is conducted under Huppah – Wedding Canopy – symbolizing the home which the couple will create. As the bride approaches, she traditionally circles the groom 7 times, to signify the support she will offer her groom. There are two parts to the ceremony: Eirusin (Betrothal) and Nisu’in (Marriage). In the first portion, a cup of wine is shared by the couple and three blessings are recited, along with a ring – a solid band to represent unending happiness – placed on the right index finger of the bride. When the ring is placed before witnesses and the traditional one-line Aramaic marriage formula is recited by the groom, this is the most important moment. The rabbi will then customarily read some portions from the Ketubah, before giving it to the bride, so that it now becomes her personal possession. The Sheva Brachot are the seven blessings recited over a 2nd cup of wine, comprising the Nisu’in section. When they are concluded, the breaking of the glass is traditionally done by the groom, to signify that even in the midst of joy, we must dedicate ourselves to Tikkun Olam – repairing the brokenness of the world. Before they join in rejoicing, the bride and groom leave the Huppah for some required moments in Yichud – seclusion, an ancient custom, but one appreciated today, offering an island of privacy and intimacy before the public celebration.

Finally, in keeping with changing times and sensibilities, how do we create meaningful experiences, while maintaining tradition, but updating the rituals to fit our personal beliefs? As I have said before, I believe that doing this is the key to our long-term survival as a people – we grow and change, while holding fast to the traditions which maintain our identity. Even with a traditional ceremony, Carl and I found a way to adjust some of the rituals to better fit our viewpoints. For example, rather than circling him 7 times, we shared this equally: I went around him 3 times, he went around me 3 times and for the final time, we circled together. We also decided to break a glass together – actually a foot-long fluorescent bulb! – to symbolize both of us working together to make the world a better place. New Jewish rituals are being written all the time for gay marriages and for intermarriages, performed by a number of rabbis. For, in the end as the great Hasidic master, the Baal Shem Tov said (and as my wedding invitation quoted):
“From every human being there rises a light that reaches straight to heaven.
And when two souls that are destined to be together, find each other, their streams of light flow together, and a single brighter light goes forth from their united being.”
Wishing you a Shabbat Shalom – a Sabbath of love for yourself and for one another,
Ruth Steinberg, LCSW
Director, Jewish Family Service
Photo caption: A beautiful example of a custom traditional Ketubah ­– Jewish wedding contract – often commissioned as a work of art to the tastes of the wedding couple. Many artists will incorporate images of Jerusalem and from The Song of Songs, as can be seen here.