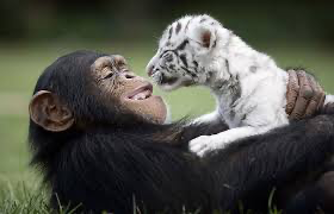 As Sabbath descends upon us this week, I find myself thinking of the natural world, perhaps as a bit of an escape from the tension of what is going on in the country – and also since we are in the early chapters of the Torah, bringing us this week, to the iconic Noah story. To prepare for the massive flood to come, Noah is instructed to build an epic ark to save the species of the world from destruction, with two of each type represented to ensure their future. But then I began thinking of all of the times in nature when we have seen so much caring and kindness between opposing species – offered so naturally, and without fear. What a fitting metaphor for what I wish we could inject into the social and political dialogue right now. Our society and the very fabric of our nation may be out of joint, but the natural world (major floods not withstanding!), moves along as it should, seasons change, and a gentle universe with it.

Our Jewish tradition includes within it a legacy of healthy and respected disagreement – in many ways, our Talmud is based upon this. We all know how to finish the familiar phrase: Put two Jews in a room…and you get three opinions! The reality is that there is a historical basis for this characterization. The Jewish tradition of dispute took root in the days of Talmud, as our sages often disagreed bitterly on matters of law and interpreting the nuances of Torah text. Rabbi Akiba and Rabbi Yosi had a famous argument about the Jewish dietary laws, specifically mixing animals and dairy food, and Rabbis Hillel and Shammai disagreed constantly on just about everything! But it is important to note that these rabbinic sages did not disagree just for the sake of it – they were united in their shared passion for what they believed in and committed to interpreting Jewish law properly. The Talmudic notion was that these disagreements were a “dispute for the sake of Heaven,” and therefore their benefit far outweighed any dangers associated with them. Thus, vigorous rabbinic disagreement not only found these sages peacefully side by side, it also created a more thorough and rich legal rabbinic tradition we have as a legacy today.

To be fully informed, read, listen, watch what is occurring on ALL sides – even if this feels very difficult – and I know it can. So, with our Talmudic sages as a model, I suggest that we explore all sides of the political debate in the days leading up to the election, as challenging as I know that can be. Even more difficult, is to see how the situation looks from the “other side.”  Recently, we at the Jewish Federation hosted a program called “Left vs. Right: The Battle for the Soul of American Jewry.” It was an excellent program, because it allowed participants to explore both sides of various questions, in a civil, thoughtful forum. A particularly moving moment was when each of the two presenters summed up his remarks by essentially making a personal pitch to embrace both sides of the divide, which indicated that both sides had merit and value. It called to mind a favorite line from the film The American President:

“America isn’t easy. America is advanced citizenship. You’ve gotta want it bad, cause it’s gonna put up a fight. It’s gonna say ‘You want free speech? Let’s see you acknowledge a man whose words make your blood boil, and who’s standing center stage and advocating at the top of his lungs that which you would spend a lifetime opposing at the top of yours.’”

But also remember that with all of the information coming at you right now, it is crucial to find a way to think for yourself and most importantly, to consider your mental health and the issue of “information overload” and fatigue. We all have to be aware of the toll this is taking on ourselves right now – and know when to be engaged and know when it is time to disengage. Members of my family will often have to remind me to “step away from the news” – and frankly, it can become an obsession. With the additional stress of the pandemic and being at home more, where we are more able and may have more time and access to flip on the TV, it may be worth scheduling a set time in the day for news, so we don’t overload ourselves. And when we are not engaged in the news of the day, try to take a break in every sense of the word. Shabbat is a great opportunity for this, built into our tradition – a perfect gift for us at this time!

Wishing you a Shabbat Shalom – a peaceful Sabbath in the midst of the noise,