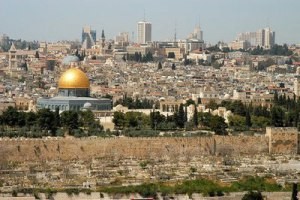 As Sabbath approaches, this week our thoughts and hearts turn eastward, toward Jerusalem... As a people, she inhabits our prayers, our poems, our songs, our souls – and today, on Yom Yerushalayim (Jerusalem Day), we celebrate her. The newest holiday on the Jewish calendar, Yom Yerushalayim commemorates the reunification of Jerusalem after the Six-Day War in 1967. Thus, this became the first time in thousands of years that Jews were allowed access to the Old City and our holiest places, including the Western Wall, a remnant of the Ancient Temple site – a monumental occasion for our people. For many of us, photographs of soldiers praying at the Kotel (the Western Wall), will be imprinted in our memories forever.

Throughout history, Jerusalem has been at the center of our faith and peoplehood – even while in exile, we yearned to return to this spiritual nexus… Jerusalem became the capital city of our people in Biblical times, during the reign of King David in approximately 1000 BCE. It was conquered twice in antiquity, the second time by the Romans in 70 CE. The destruction of Jerusalem was a pivotal event in Jewish history which began thousands of years of mourning – including an official day of grieving every year on Tisha B’Av (the 9th day of the month of Av). Our Biblical prophets filled their writings with deep expressions of yearning to return to Jerusalem. During the next two millennia of exile, Jerusalem remained the spiritual capital of the Jewish people. To this day, we face East – in the direction of Jerusalem – for prayer, and our liturgy is filled with references to the “City of Gold,” as it is called. However, there has never been a special day to honor the city until recent times.

When my planned one-year abroad program in Jerusalem as a college Junior turned into nearly two years, I became a happy Yerushalmit for most of that time…and I remember that one of the best things about the humble dorms on Mt. Scopus, were the sights and sounds of this incredible city. Early in the morning, I would hear the beautiful sounds of the Muslim call to prayer by the muezzin, followed soon after by the clanging of the church bells from the Christian Quarter – and then I would look over and from a distance, could see throngs of Jewish worshippers making their way to the Western Wall through the Jewish Quarter. Truly, a wonder to behold. And at dusk, the stone walls of the Old City really do turn gold, as the sun reflects upon them. It is other-worldly and indeed seems touched by heaven.

Of course, the politics are complex and the situation not an easy one to solve, but for today, let us honor this glorious city… As a new holiday, Yom Yerushalayim is still developing its own customs and traditions. Many Israelis are reinstituting the ancient idea of a “pilgrimage” to Jerusalem on this day – and making trips (even hikes) there from throughout the country to show solidarity. School children spend the weeks leading up this day learning about the city’s history, and in more typical years, there are parties and picnics.

The ultimate hope for Jerusalem is expressed in Psalm 122, often quoted on this day: “Ir shehubrah lah yachdav – A city uniting all…” Even the name of the city itself includes the hope for shalem – wholeness, the same word from which we derive shalom – peace. And, indeed, at the end of the Passover seder when every year we say: “Next Year in Jerusalem” – it is likely to be meant less literally, but more as a wish of the state for a perfect peace for us all and for our world. And during these challenging times, this message of peace is even more crucial.

With blessings for wholeness and peace this Shabbat – to you and everyone you love,