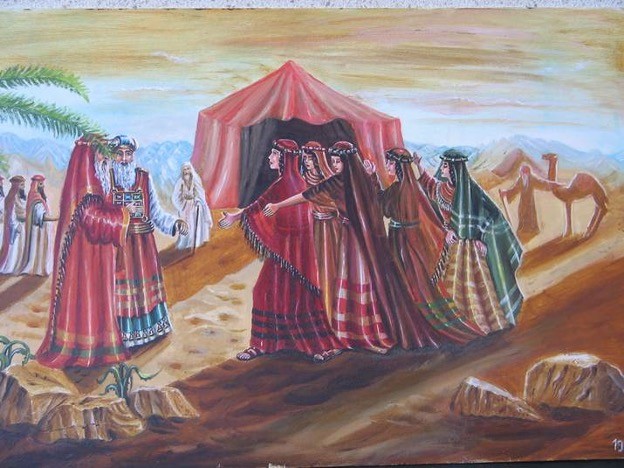 “The Divine spirit is in the midst of her, she shall not be moved.
The Divine One will help her when the morning dawns.”

This week, under a new moon, the month of Tammuz moves to the auspicious month of Av upon the arrival of Sabbath. Other transitions also occur on this Shabbat, as we complete the reading of the 4th book of the Torah – the Book of Numbers. In Hebrew, this book is called Bamidbar – which literally means, “In the Desert,” and indeed it chronicles the journey and experiences of the Israelites as they wandered through the desert on their way to the Promised Land – major events, minor squabbles, and many small stories which occurred as they formed a nation. I always enjoy the drama around completing one of the books of the Torah in the synagogue, which will occur around the world this Sabbath. As we near the end of the reading of the last words of text, the community will rise in their seats, and upon the completion of the book, everyone present will call out together: “Chazak, Chazak, v’nitchazeyk – Be strong, be strong, and we will be strengthened.” This communal announcement suggests that we are made stronger as a community, as we continue on with the tradition of reading the Torah.

The final portions of the Book of Numbers – Mattot and Masei – are almost always combined into one double portion, which we read this Sabbath, with the plight of women forming a bookend for these final chapters. It may be because of the calendar cycle that these two parashot are combined, but there may be another theme which binds these readings. Mattot opens with a detailed chapter on the subject of vows: sacred oaths made to God that we will behave in a specific way, giving one a sense of control over their lives. Surprisingly, 14 out of the 17 verses in this chapter address the issue of women and vows. But we do learn that the Torah believes that while men must keep their vows, women do not always have the same requirement. But, in a forward-thinking verse (30:10), we learn that divorcees and widows must keep their oaths, as they no longer have men to “protect” them, thus making their word as binding as a man’s. And just as the double portion began with the issue of women, it ends this way, too. As Masei and the Book of Numbers come to a close, there is a challenge to a ruling previously decided in favor of women earlier in the book by the men of the tribe of Manasseh. Although a concession is given, the men are not successful in diminishing the gains achieved by the women. To understand this further, we need look back to last week’s portion.

The legendary story of the Daughters of Zelophehad – or, as I like to call it, the most famous Biblical story you’ve never heard of – is one of my all-time favorites. Tucked between the various sections of narrative in Chapter 27, we find this small mention of big daring courage. After a census is taken of males over 20 years of age and land is distributed, we learn that a man named Zelophehad has died with no male heirs. His five daughters – named in the Torah and who until today enjoy a bit of a “cult following” (I’ve even seen t-shirts listing their names!) – have no way to inherit their father’s land. So, in a bold move, Mahlah, Noa, Hoglah, Milcah and Tirzah dared to “go out” from their living space, their prescribed circumstance, and come forward publicly before Moses and the whole assembly – an unprecedented statement on its own. They not only come forth, but they speak with wise determination about their plight, asking for God’s law to be changed, as it does not take into account their current situation: “Let not our father’s name be lost to his clan just because he had no son! Give us a holding among our father’s kinsmen” (27:4). Moses takes the case to God, who unequivocally supports the sisters, and in that moment, the law is changed for all time, as a “decree of justice.”

This seemingly small incident with a huge lasting impact leaves us with a number of meaningful lessons for our own lives in our day. One message, of course, is the power of showing up and speaking up. In addition, there is the important idea here for those who think that their destiny is fixed or that divine justice has abandoned them. This story offers a message of hope that instead of accepting the course we are given, we can think differently and write our own stories and move from the place others have given us to the place we need to be. As nothing is more important in this life than what we believe is worthy. And finally, this tale teaches us about the central role of community. Our email signatures at the Federation read: “The Power of Community” and it is really true. God, Moses, and the ancient Israelite community supported these women, just as we support each other in our community. In this way, families are strengthened and the community thrives – and that is truly a special power.

Wishing you a Shabbat Shalom – a Sabbath of peace – with many blessings for us all,

Photo caption: In this pictorial rendering, we see the five daughters of Zelophehad and their daring and direct approach to Moses with their request to be heard for their unique situation. Generally unknown, this story has had a profound impact on property law for all time.