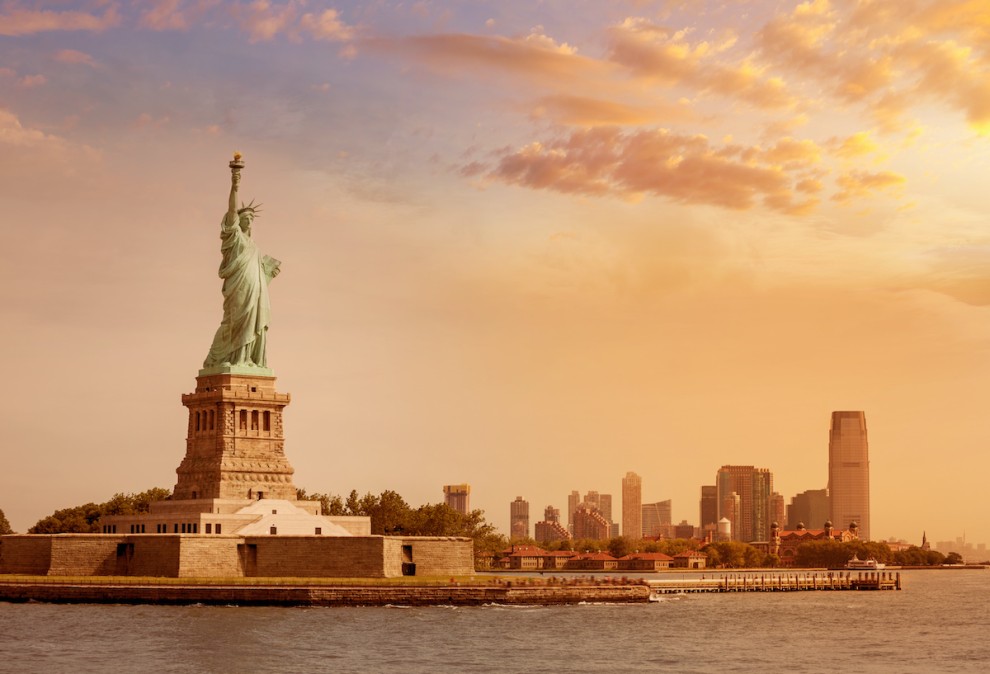 As Shabbat arrives this week, we also simultaneously welcome the July 4th holiday, and with all of the challenges facing our country, I thought it might be time for us all to offer a prayer for America. For many who have come to her shores, America has been a refuge from the storm, a safe haven from persecution, a “Goldena Medina” – “a land whose streets were paved with gold” and where dreams of a good and successful life would come true. That was the way it was for my paternal grandparents who came from Russia at the end of the 19th Century – and I imagine many of you have a similar story. They described the sight of the Statue of Liberty very similar to the one pictured above – and leaving their shetl in Russia did bring a great life.

Our Founding Fathers had the essential blueprint, the right idea for freedom – but they did not have it in mind for everyone. They bestowed upon their citizens something never truly given before: they created an unpresented format based on the inherent belief that man is to be completely free to live and worship without fear of persecution from his government, an astounding empowerment for the men of this new country. But the problem was that it was only for white MEN. This new brand of freedom, as radical as it was, did not apply to women, and certainly not to slaves (or anyone of color), and those who were conquered in the process, which in this case, was Native Americans. Thus, freedom came at a terrible price – and we have been trying to correct these enormous mistakes ever since, with clearly a long way to go.

And yet…as I look at other countries, I feel so lucky to live here, even with all of our issues, which I do not minimize. As a young child, I remember a mission my parents were sent on by the Jewish Federation of Los Angeles. They were asked to smuggle in prayer books and other Jewish ritual objects to remote parts of the Soviet Union where Jews were not allowed to worship freely. I recall my mother tearing the lining of her winter coat and sewing in the books and objects – and fearing for her safety. When they returned, she cried and admitted they were followed and she felt afraid – but also glad that they helped Jews stay connected to our tradition. I could not believe that anyone had to go through this to be able to pray and study freely.

Even more recently, I learned a similar lesson on my first trip to Hungary last year. I had dreamed of visiting the country of my maternal grandparents, from which many of my family members were taken and perished in Auschwitz during the Holocaust. Although now a democratic country (run by an autocrat, it is true), you do not get the feeling of happy, free people in the streets of Budapest – or at least, I did not. After years of trauma and being conquered by different empires, the impact of this is felt amongst its citizens – there is an inherent bitterness and xenophobia. Living at the crossroads of Europe, a question of identity, and the remnants of communism, perhaps.  A beautiful country on this outside, but I felt lucky to come home.

So, yes…America is not perfect, to say the least. But we have the freedom to speak up, to change it. To work together, to vote, to protest – and to make a difference. It is our America. And God Bless Her. Our prayer books often contain a prayer for our country, usually recited at the end of the Torah service. I will offer a section of one of those prayers to close here:

Our God and God of our ancestors…Unite the inhabitants of our country, of all backgrounds and creeds, so that we may banish hatred and bigotry, safeguard our noblest ideals, and preserve those institutions which nurture liberty.

May this land under Your Providence be an influence for good throughout the world, helping us to unite all peoples in peace and freedom, and bringing closer to fulfillment the visions of your prophets:

‘Nation shall not lift up sword against nation, neither shall they learn war anymore.’   ‘For the work of the righteousness shall be peace, and the effect of righteousness calm and confidence forever.’ Amen.

“This Land is Your Land” written by Woody Guthrie is so beautiful and beloved, it is often considered an alternative national anthem. He wrote the lyrics in 1940 to an existing tune of the country music legends the Carter Family. I wanted to share an exceptional version with you here – there are many, of course, but this one, sung by Elizabeth Mitchell includes all of the verses, even the ones casting a more critical eye on our country. While remembering the work we still have to do, I hope you will be moved by the beautiful images of America, the beautiful.

Wishing you a peaceful Shabbat and a safe 4th of July holiday,